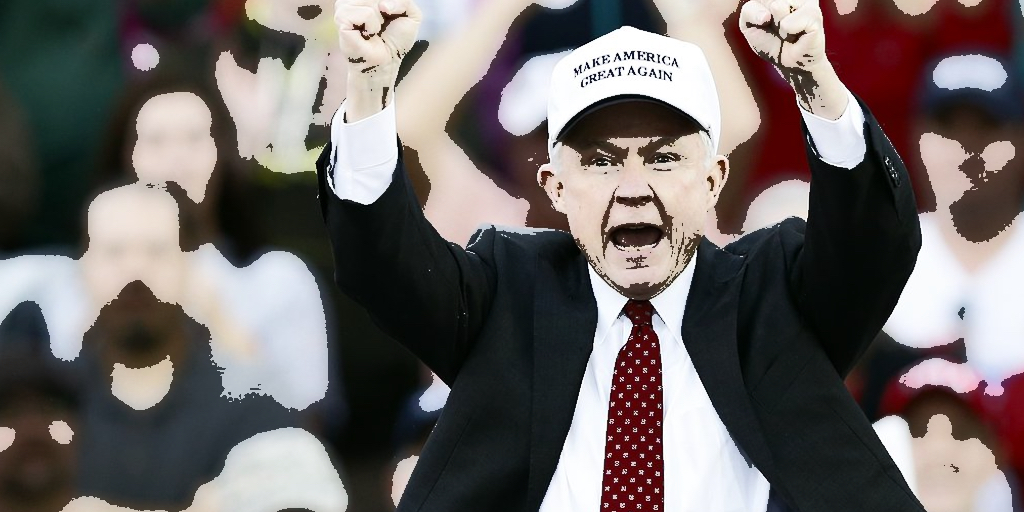 This guy. What a fraud.

3/ Trump’s hard-line actions have an intellectual godfather: Jeff Sessions. The senator lobbied for a “shock and awe” period of executive action that would rattle Congress, impress Trump’s base and catch his critics unaware. Trump opted for a slightly slower pace, because he wanted to maximize news coverage by spreading out his directives over several weeks. (Washington Post{:target=”_blank”})

4/ Sessions approved by Senate committee. The Senate Judiciary Committee approved Sessions 11-9 along party lines. His nomination now goes to the floor, where he is widely expected to be confirmed given the GOP’s 52-seat majority. (The Hill{:target=”_blank”})

6/ Jeff Sessions confirmed as Attorney General, capping a bitter and racially charged nomination battle. Sessions survived a near-party-line vote, 52 to 47, in the latest sign of the extreme partisanship at play as Trump strains to install his cabinet. No Republicans broke ranks in their support. (New York Times{:target=”_blank”})

7/ Sessions sworn in as attorney general while Trump signed three executive actions aimed at bolstering law enforcement. Sessions pledged to attack a crime problem that he described as “a dangerous permanent trend that has places the health and safety of the American people at risk.” Although murder jumped by 11% in 2015, the biggest one-year increase in more than 40 years, the overall rate remains the lowest in decades. (USA Today{:target=”_blank”})

8/ Jeff Sessions resists pressure to remove himself from his role in investigating Trump’s aides and their relationship with Russia. Democrats and outside groups say Sessions lacks the independence to oversee criminal investigations that might lead back to the White House. Sessions and Flynn were both early, influential advisers in Trump’s presidential campaign. (New York Times{:target=”_blank”})

9/ More Democrats call on Sessions to withdraw from Russia probe. A letter sent to Sessions by 55 lawmakers asks him to withdraw based on his ties to Trump’s campaign and key figures who have been alleged to have ties to Russia. (Washington Post{:target=”_blank”})

10/ Chuck Schumer: Jeff Sessions must recuse himself from the Flynn investigation. The gravity of Flynn’s contact with the Russians and the reports that he may have lied to the FBI cannot be overstated or ignored. Revelations about that contact may be only the tip of the iceberg. There’s an overwhelming view in our intelligence community that Russia tried to influence our election. (Washington Post{:target=”_blank”})

11/ Sessions vows to get tough on crime, saying a recent spike in violence in some cities is “driving this sense that we’re in danger.” He’s pledged to commit more federal energy to fighting crime even though crime rates remain far below their 1970s and 1980s levels. Trump is expected to emphasize that the rise in violence in some cities was not “a one-time blip” but rather “the beginning of a trend” during his address to a joint session of Congress tonight. (New York Times{:target=”_blank”})

12/ Sessions met with Russians twice last year, but didn’t disclose the encounters during his confirmation hearing when asked about possible contacts between members of Trump’s campaign and representatives of Moscow. Sessions oversees the Justice Department and the FBI, which have been leading investigations into Russian meddling and any links to Trump’s associates. He has so far resisted calls to recuse himself. (Washington Post{:target=”_blank”})

13/ Pelosi calls for Sessions’s resignation, saying “Jeff Sessions lied under oath during his confirmation hearing before the Senate.” (The Hill{:target=”_blank”})

14/ Jeff Sessions recused himself from the Russia inquiry and from any future investigation of Russian meddling in the 2016 presidential election. His conversations with the ambassador, Sergey Kislyak, came amid suspected Russian hacking directed at Clinton’s campaign. (New York Times{:target=”_blank”})

15/ Nancy Pelosi and Chuck Schumer say Sessions perjured himself and demand that he resign. “For the good of the country, Attorney General Jeff Sessions should resign,” Schumer said. Pelosi took the same position: “Sessions is not fit to serve as the top law enforcement officer of our country and must resign. There must be an independent, bipartisan, outside commission to investigate the Trump political, personal and financial connections to the Russians.” (New York Times{:target=”_blank”})

16/ Sessions used campaign funds for RNC trip where he met Russian ambassador for “official” reasons. Records show the attorney general used campaign account for travel expenses to Cleveland, where he met the Russian envoy and spoke about Trump’s campaign at the event. (Wall Street Journal{:target=”_blank”})

17/ Sessions will submit amended testimony and address Senators’ questions over his contacts with Russia’s ambassador last year. The offer came after all nine Democratic senators on the Senate Judiciary Committee in a letter asked the committee chairman to bring Sessions back for a follow-up hearing to explain his past testimony and recent decision to recuse himself from any investigation involving the Trump campaign. (NBC News{:target=”_blank”})

18/ Moscow blames anti-Russian hysteria in the U.S. for Sessions’s plight, saying “fake news” and a “witch hunt” are intended to head off better relations. (Washington Post{:target=”_blank”})